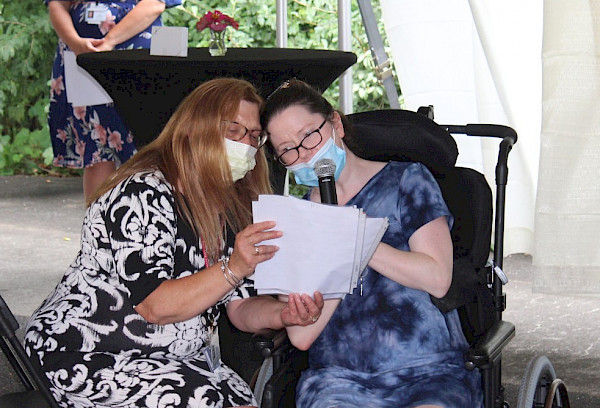 HOLYOKE (August 20, 2021) – On August 18, 2021 the team at MissionCare at Holyoke held a ceremonial opening, so named because the care center has been open and in operation as MissionCare since early 2021.

In attendance were residents, staff, families, dignitaries, partners and members of the iCare Health Network team. The theme included references to butterflies to signify the process of MissionCare becoming what it is today as a result of the coming together of Farren Care Center, Mount Saint Vincent and iCare.

Much like the metaphor of a butterfly, this building, it’s residents, staff and friends have been through a life changing transformation. It did not happen on February 2nd, but instead has been evolving since it’s creation. I would be remiss not to recognize the work of the sisters of providence in assuring the future and health of those they served from the moment they created something, including MSV and Farren.

I know we are all aware of the metamorphosis of caterpillar becoming a chrysalis, and finally a butterfly.

But there is a much less known/but most important, aspect of the creation of these beautiful creatures. It is within the cocoon that something magical happens.

If we liken this to The sisters of providence, they carried those imaginal cells during the existence of both Farren care center and Mount Saint Vincent. Those original cells and imaginal cells were released during its dormant stage, becoming something brand new, MissionCare at Holyoke.

This is much like our world has experienced in the last year and a. Half. We are not who we once were. We have transformed into new versions of ourselves. The experience of COVID in our lifetime has created a stronger, more flexible, grateful, safe version of who we once were. Our imaginal cells, carried through our lifetime, have merged with our DNA to build who we are today.

Other highlights of the Program included:

*COVID precautions including masks and screening were utilized. Residents appear with express permission.