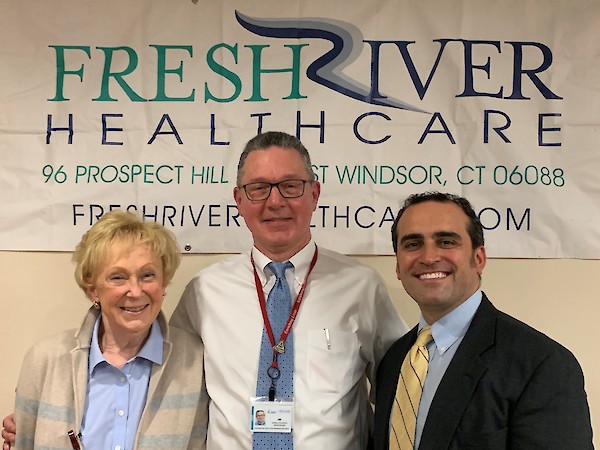 EAST WINDSOR (May 2, 2019) – On April 24, 2019 Fresh River Healthcare hosted a presentation by Dr. Duarte Machado of the David and Rhonda Chase Family Movement Disorders Center. Dr. Machado presented to an assembled group of caregivers, clinicians, persons with Parkinson disease and others on the topic of “Dyskinesia: The Sudden and Uncontrolled Movements of Patients with Parkinson Disease.”

Dyskinesia is defined as abnormal, uncontrollable, involuntary movements. There are many different types of dyskinesia with symptoms that range from minor tics to full-body movements and it is often considered characteristic of Parkinson’s Disease despite a range of other symptoms and manifestations.

Dr. Machado is board certified in Neurology with subspecialty training in Movement Disorders. Dr. Machado committed to a career caring for those with Movement Disorders early in his life when his grandmother was diagnosed with Parkinson’s disease while he was a high school student in Waterbury, CT. Dr. Machado has extensive clinical expertise in the recognition, diagnosis and treatment of patients with disorders of involuntary movement, including the full range of both hyperkinetic and hypokinetic movement disorders.

The presentation was part of Parkinson’s Disease Awareness Month in April and Fresh River Healthcare reaching the milestone of the first anniversary of its Parkinson’s disease program. The Fresh River team has spent a year developing and refining movement disorder clinical and supportive programming such as specialized rehab equipment, swallow testing and training, exercise programs, respite, and home assessment among others.